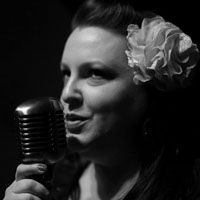 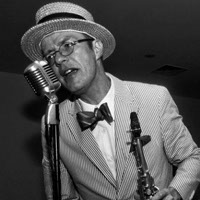 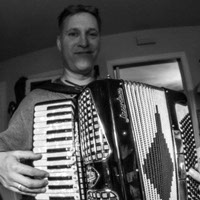 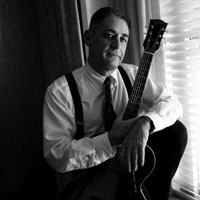 Southern rock, house, and folk music….our Miss Christa, born and raised in Maryland, has a genre-jumping voice that is just as at home in a packed warehouse club in Tokyo as it is in a smokey dive bar in Philadelphia. But her true love is the sexy, romantic, gritty yet smooth sounds of the jazz age. Luckily, her swing dance teacher, Mr. Paul Salter, was also a musician, so she jumped at the chance to try her wings when he suggested that they play around with a few of his music buddies and see what happens. Several weeks later, each canary fell beak over wing in love with this song bird and the Gin Canaries were formed. When she's not in chanteuse mode, Christa can be spotted nesting in her Mt. Airy residence, shopping for bargains and sipping red wine at the local watering hole.

Paul fell out of a nest of deafening electric savages on to a dance floor where he learned how to hold a girl and find the beat with his feet in a crowd dancing to hot jazz.  While being marinated in this swirl of swinging bodies, he learned enough songs and met enough talented souls to play music for the natives he was dancing with.  He started out hammering away on the archtop guitar struggling to be heard among blasting trumpets and tubas, and then he moved on to the singing reeds of saxophones and clarinet.  He's been running around dance floors hollering and swinging guitars and horns ever since.

Dave was born blind near Coutchman, Texas in Freestone County, near present-day Wortham, Texas. He was one of eight children born to sharecroppers Alex and Clarissa. Disputes regarding his exact birth date derive from contradictory census records and draft registration records. Overcoming opposition from his clergyman father, he became a professional pianist at 15, working in cabarets and theaters. In 1918 he won a talent contest playing Johnson's "Carolina Shout", a song he learned from watching a player piano play it. Some of his other achievements include multiple Guinness World Records; 13 Grammy Awards as well as the Grammy Legend Award and the Grammy Lifetime Achievement Award; 26 American Music Awards, more than any other artist, including the "Artist of the Century" and "Artist of the 1980s".

With the untimely passing of Eddie Lang, Louis slipped in as Bing Crosby’s full time guitar player. Things went well with Bing until the war broke out. That’s when Louis went to France and joined the French resistance, playing occasional gigs with Stéphane Grappelli . After the war, Louis worked on his tan and changed his name to Freddy Green and sat in with the likes of Fats Waller and Benny Goodman. As the big band era faded and the British invasion began, Freddy changed his name back to Louis and went to India to find enlightenment. When the Beatles showed up, he knew it was time to go deeper underground. After perfecting suspended animation, Louis emerged from his self-exile in the new millennium and now nests with the Gin Canaries playing guitar and banjo. 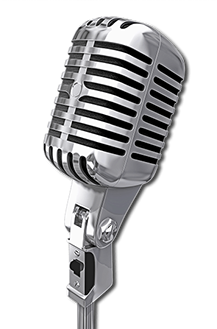